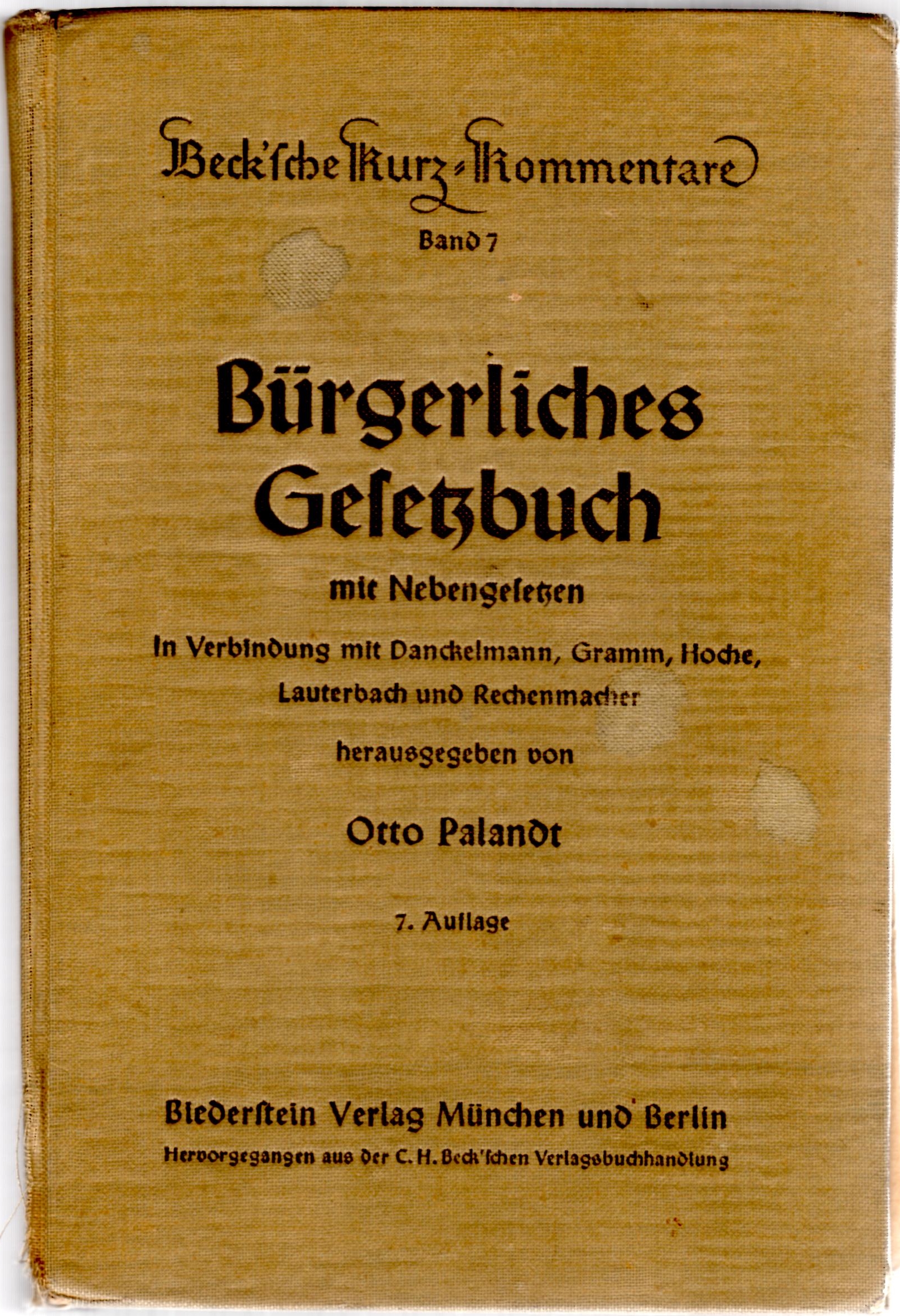 In 2018, there was a controversy in Germany about whether doctors who performed abortions could advertise this service. In 2017, a German doctor, Krista Hänel (g), had included a reference to the fact that she provided abortions on her website. She was then prosecuted under §219a of the German Criminal Code, which prohibits “advertising” abortion services. She protested that she was not advertising or promoting abortion, but simply advising people neutrally that she performed them. Nevertheless, she was convicted and sentenced to a €6,000 fine. While she appealed the judgment, the law was changed because of the publicity her case attracted, and her conviction never became final.

So that controversy has been put to bed. But another lives on: During the 2018 controversy, a journalist, Gaby Mayr, argued that the judges who convicted Hänel — improperly, in Mayr’s view — had relied on a criminal-law commentary to justify their verdict.

Which brings us to the interesting subject of commentaries in German law. A commentary is a huge book — or a series of volumes — which “comments on” every single aspect of a certain area of law — criminal law, family law, competition law, etc. Commentaries have a history dating back to the Roman times, and also played a vital role in English common law, the most famous example being William Blackstone’s Commentaries on the Laws of England, which shaped English jurisprudence for centuries.

Commentaries have since lost influence in common-law countries. They exist, but they’re generally only used by law students to master unfamiliar areas of the law. However, commentaries play a much broader role in Germany — you could fairly say they are at the very heart of German law. German lawyers joke: “In the beginning was the word, the commentary followed swiftly.” A good recent article (g) on German commentaries in English cited the following definition from a study by the German Science Council (Wissenschaftsrat):

“Legal commentaries usually refer to legal practice and help form structures and define principles in individual areas of law. … These commentaries render difficult legal material accessible for non-specialists, present norms in a systematic, interpretative context, provide information on the genesis of laws, and help practitioners use laws by selecting and interpreting their most important aspects.”

Commentaries are rich mines of information and analysis. But they play an equally important advisory role: They tell lawyers not just what the law is, but recommend what it should be. Professors (and sometimes practitioners) discuss various different approaches to a legal problem, and then boldly state which one they think is correct, providing citations and analysis to back up their argument.

This means that commentaries have a specific approach and “personality”: there are invariably several commentaries on a particular legal area. Some are written primarily to help practitioners solve everyday problems, and stick mostly to the facts. Other, more theoretical and subjective commentaries advocate for various schools of legal thought. Commentaries can be liberal or conservative, “critical” or progressive. The most famous commentaries are known by the names of the professors who initiated and/or revised them. The most famous short commentary on civil law, for example, is simply called the “Palandt” (g), after Otto Palandt (g), the (now long-dead) professor who published the original edition in 1938. The Palandt is updated yearly, and it’s not an exaggeration to say that virtually every lawyer in Germany owns a “Palandt” and uses it every day for civil-law questions.

Which now brings us to the abortion controversy. The main players are Thomas Fischer, one of the most original figures on the German legal scene. Fischer (g) worked his way up to becoming a judge on Germany’s highest criminal court (he retired in 2017), and is also the current author of the most influential short commentary on criminal law, the “Fischer” commentary, which is now in its 66th edition (g) published by Germany’s most prestigious legal publisher, C.H. Beck. Obviously, Fischer wasn’t always the author of this commentary; he “inherited” the commentary. The commentary was started by Otto Schwarz, then maintained by Herbert Tröndle (g), who brought Fischer on board, so that for a while, the commentary was known as “Tröndle/Fischer”. Since Tröndle’s retirement, Fischer’s name alone appears on the book. But ordinary Germans know nothing of this. However, they do know Fischer, because he writes popular columns and books about German law. Fischer’s renowned for his clear style, many strong opinions, and witty verging on acerbic style. He’s not everyone’s cup of tea, but he’s never boring.

And now, at long last, we get to the abortion controversy. In 2018, the journalist Gaby Mayr argued that Fischer’s criminal-law commentary was partially responsible for the conviction of Dr. Hänel. Two of the courts which passed judgment on the doctor cited a sentence from the commentary: the abortion advertising ban was intended to prevent “abortion from being perceived in public as something normal, and commercialized.”  The courts therefore sentenced the doctor, since the “spirit” of the law was to forbid “normal” marketing of abortion, which is what her website supposedly did. So a sentence from a commentary affected the outcome of a real-world legal case — a fairly common occurrence in Germany, where law professors have a level of real-world influence on policy which British or American law profs can only dream about.

Mayr claimed that this sentence showed that the “spirit” of Tröndle — a convinced abortion opponent — “lived on” in Fischer’s new versions of the commentary: i.e., previous right-wing authors commentary had given the criminal law commentary an anti-abortion ideological tint, which Fischer was at least failing to correct, assuming he did not actually share the previous authors’ anti-abortion views. This was, Mayr claimed, “bad for German jurisprudence.”

Fischer was, unsurprisingly, not amused (which is also a German expression). He sued Mayr for publishing “incorrect statements of fact” about his work on the commentary. He showed that the sentence about advertising making abortion “normal” and “commercialized” wasn’t written by him. In fact, it wasn’t even written by the arch-conservative Tröndle. It was actually a part of the original justification statement for the advertising ban, which was enacted in 1974, and was cited only to provide historical context. As for the rest of the commentary on § 219a, Fischer showed he had indeed updated it several times.

The Karlsruhe Regional Court court ruled in Fischer’s favor, and issued an injunction (called an Unterlassungserklärung in German) forbidding Mayr to claim that Fischer’s commentary was biased, that he hadn’t changed anything significant since the anti-abortion Tröndle had been at the helm, and that it was “bad for German jurisprudence”. The first two claims were incorrect factual statements, which are actionable under German law. The last claim was a value judgment, which ordinarily would be protected. However, the court ruled, this value judgment was based on the incorrect factual statements, so it also was prohibited. Germany is a loser-pays system, so the court assigned 75% of the costs of the proceedings to the journalist Mayr, since she lost on 3 of the 4 points Fischer raised. Mayr’s lawyer has said she reserves the right to file an appeal against the judgment.

Mayr did win on one point. She had also claimed Fischer’s work on the commentary displayed “grobe handwerkliche Schlamperei” — crude technical sloppiness. Strong tobacco, as the German saying goes. Surprisingly, the court actually ruled this comment was protected by freedom of speech, so Mayr won this point. During their public exchange of verbal cannonades, Fischer had written indignantly that “Mayr, the journalist, doesn’t know what she’s talking about. It is abundantly clear she read nothing, didn’t check any quotations, and has no idea how legal publishing works.” Ouch! Mayr’s quote about “technical sloppiness” came in response to this broadside by Fischer. Therefore, even if it was a harsh insult by Mayr, it was delivered in response to an equally-harsh attack by Fischer. This is known in German law as the “right to counter-attack (Recht zum Gegenschlag): The court will apply slightly looser standards to a statement if it was made in response to an attack. Fischer may well appeal this part of the judgment, so the case could well live on. Your faithful reporter will stay on the case.