In 2005, the German Bundestag revolutionized social welfare law with the so-called Hartz IV1(g) reforms. These reforms were pushed through by former Social Democratic German Chancellor Gerhard Schroeder, and quite possibly ended his political career. The reason? They tightened eligibility criteria, capped the amount of benefits people could receive, and tied the benefits to “cooperation” requirements intended to “re-integrate” the unemployed into the workforce. From now on, welfare recipients would be required to sign “re-integration contracts” in which they made binding promises to seek work or attend re-training. If they declined to cooperate, their benefits could be slashed by 30%, or even more.

The law was, according to its title, supposed to “modernize” the German labor market, but opponents saw it as a direct attack on the principle of the social welfare state. Instead of providing all Germans with an unconditional guarantee of assistance if they could no longer support themselves, the state would now grant only temporary benefits tied to onerous requirements. Critics decried the law as the first step toward a restricted, time-limited, conditional “Anglo-American” (g) model of welfare assistance. It’s no exaggeration to say the Hartz IV reforms were the most controversial legislation passed by the Bundestag so far this century. Further, the new welfare scheme dramatically increased the overall costs of social welfare (g) in Germany, even as individual benefit amounts were reduced. The main reason was apparently that they inadvertently expanded the pool of eligible recipients, and required an increase in the bureaucracy needed to implement sanctions and re-integration measures. Nevertheless, the reforms enjoyed — and continue to enjoy — broad bipartisan support among politicians, and are often given credit for dramatically lowering Germany’s unemployment rate.

Opponents of the laws, however, immediately challenged them in court, hoping that the Federal Constitutional Court would declare them illegal. There are two main legal bases for these challenges. First, the “inviolable” guarantee of human dignity contained in Art. 1 of the German Basic Law. It’s widely accepted in Germany that allowing people to face extreme hardship without any assistance from the state violates human dignity. A society which protects human dignity must, therefore, ensure that everyone has access to the basic minimum necessities to live a dignified, independent life: shelter, food, education, medical care, and enough spare cash to enjoy some minimal form of leisure and community participation. The second legal basis is what’s called the “social state” guarantee, found in Article 20(1) of the Basic Law: “The Federal Republic of Germany is a democratic and social federal state.” The word “social” can be, and has been, defined dozens of different ways, but courts generally accept that this part of the Basic Law requires Germany to always guarantee basic conditions for human flourishing among all its people. It adds force and meaning to the more general human-dignity guarantee.

If opponents of Hartz IV were hoping the Federal Constitutional Court would simply scrap the law as a whole, they were disappointed. Like most Supreme Courts, the FCC is a master of the art of political and legal compromise. In 2010, the Court declared (g) the minimum benefit under the law to be unconstitutional, but only because the benefit amounts had been calculated using an outdated formula. The legislature corrected the problem, slightly raising benefits for some people. The overall program survived.

The most recent challenge was to the system of sanctions on benefit recipients who refuse to cooperate with attempts to re-integrate them into the workforce. After a 2011 amendment to the laws, these benefit reductions proceeded in three steps. First, a reduction of 30% in overall benefits over a three-month period. If that didn’t secure cooperation, benefits could be cut by another 30%, so the recipient would only receive 40% of the normal amount. And if this didn’t spur cooperation, the ultimate sanction was 100% — the recipient gets no welfare assistance at all, although he or she might still get rent and utilities support. This is, of course, a massive oversimplification of what is a very complex scheme.

At this point, I’d like to address how things work on the ground in German welfare offices, based not only on online accounts (g) but on former students who have gone on to work there. In the real world, JobCenters are often severely understaffed, and few caseworkers want to trigger the sanctions process, which generates large amounts of additional paperwork. Thus, the level of non-cooperation you must display even to earn the first, minimal sanction is truly impressive. To continue getting welfare benefits under the Hartz IV scheme, all you have to do is show up personally at the welfare offices (now called ‘JobCenters’ in Denglish), meet your caseworker, and provide some minimal documentation showing you’re making some attempt to re-integrate into the workforce. This could involve sending out a job application, or attending a class, or doing some research.

You may also be required to attend special job-training classes, which are provided free of charge (and at considerable expense to the German taxpayer). These may either teach you a specific job skill, or — if you’re a particularly hard case — simply provide instruction on how to live a basically organized life and come to terms with the basics of being employed (wear clean clothes, get up in the morning). But for most people, all you have to do is show up. You chat with your caseworker, sign a form or two, and you’ll continue getting your benefits. You will only face sanctions if you ignore repeated interview dates i.e., you get a letter setting a date for a meeting with your caseworker, and completely ignore it, without even providing an excuse. Then you get another letter, with another date, and you ignore that. And so on, and so forth. All of these letters also contain a clear warning that you will face benefit cuts if you don’t respond to them. In general, you’ll only be sanctioned if you display almost an entire year’s worth of total non-cooperation, and have been warned many times about impending benefit cuts.

But of course the Federal Constitutional Court rarely concerns itself with the actual implementation of laws. In this case, it was called upon only to review the sanction scheme in the abstract. The Court started out with a few basic observations (g). (I will link to the press release concerning the decision.) The State may require welfare recipients to “participate” in plans and projects designed to “eliminate the reason for their neediness”. These can also, the Court ruled, include sanctions. The press release continues from here:

Based on this reasoning, the First Senate of the Federal Constitutional Court, in the judgment issued today, found no objection to a benefits reduction in the amount of 30% of the applicable general benefits level in case of the violation of certain cooperation duties. However, the Court, relying on current information, declared sanctions unconstitutional if, based on repeated violations of cooperation duties, they result in a reduction of more than 30% in one year, or even a total suspension of benefits. The sanctions are also unconstitutional to the extent they result in a mandatory reduction of benefits based on non-cooperation even when this would impose extraordinary hardship, and to the extent they impose a fixed term of three months on all sanctions regardless of circumstances. 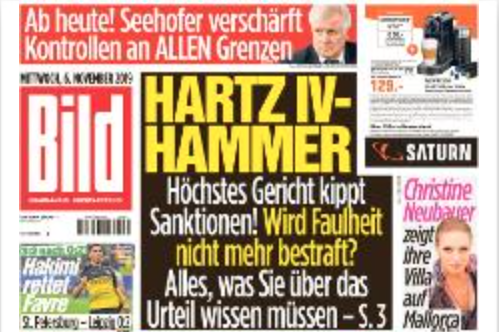 This is as far as many journalists and commentators apparently read. The Bild tabloid called the judgment a “Hammer-Decision”, questioning: “Will laziness no longer be punished?” The tabloid also ran an interview (g) with “Germany’s Laziest Unemployed Guy” who rejoiced: “Now Hartz IV comes on a silver platter!”. Many people tweeted that by “abolishing” sanctions, the Federal Constitutional Court had essentially introduced an unconditional basic income through the back door.

On Twitter, a former employee of a JobCenter described the FCC’s decision as “wrong”. He formerly opposed sanctions on welfare recipients, but years of working in a JobCenter had taught him that all too often, it was, unfortunately, impossible to make progress without them.

But did the Federal Constitutional Court abolish sanctions? The answer is actually no — and the decision may give the state much more leeway than anyone realizes. Alexander Thiele, a professor in public law from the University of Göttingen, carefully read the entire decision, and posted (g)  “8 theses” about it. According to Thiele, the decision could well be a landmark on the way to more welfare restrictions, not fewer. Until now, Thiele writes, most commentators has assumed that the human dignity / social state guarantees (and the way the Court interprets them) mean that there is a mandatory, concrete, specific lower limit which government welfare benefits may never cross. This is what the less-informed commentators presume: that the Court said the state may never reduce benefits by more than 30% of the standard rate.

But that is not what the Court said, Thiele notes. The Court carefully specifies, in its decision, only that sanctions cannot (1) be imposed for a mandatory 3-month period in all cases; (2) without an escape clause for special hardship. What’s more, the Court also used this reasoning when it spoke of reductions of benefits by 60%, and even 100%. The Court noted that the incentive effects of these reductions had not yet been determined by adequate research, and that they lacked the necessary safeguards — i.e., a way to reduce the 3-month period, and exceptions for hardship cases. But, as Thiele observes, it should be easy to demonstrate the 60%/100% sanctions are effective (they definitely are, according to my friend). And once that’s done, and the safeguards are put in place, then 60% and even 100% benefit cuts would be constitutionally acceptable.

Thus, Thiele argues, the decision is anything but a victory for welfare advocates. Rather, it points the way forward for total deprivation of welfare benefits for people who persistently flout their cooperation duties. Thiele wonders how this can be square with the “inviolability” of human dignity.

As between Thiele and a tabloid, I’ll pick Thiele’s interpretation any day. I’ve read the key parts of the decision and think he’s right. Whether the Bundestag will take the Court’s suggestions and create a new, enforceable sanctions scheme remains to be seen — as is whether the Court’s decision signals a fundamental change in its interpretation of human dignity.

3 thoughts on “The Federal Constitutional Court Eviscerates German Welfare Law. Or does it?”