First, a plug for the upcoming podcast: 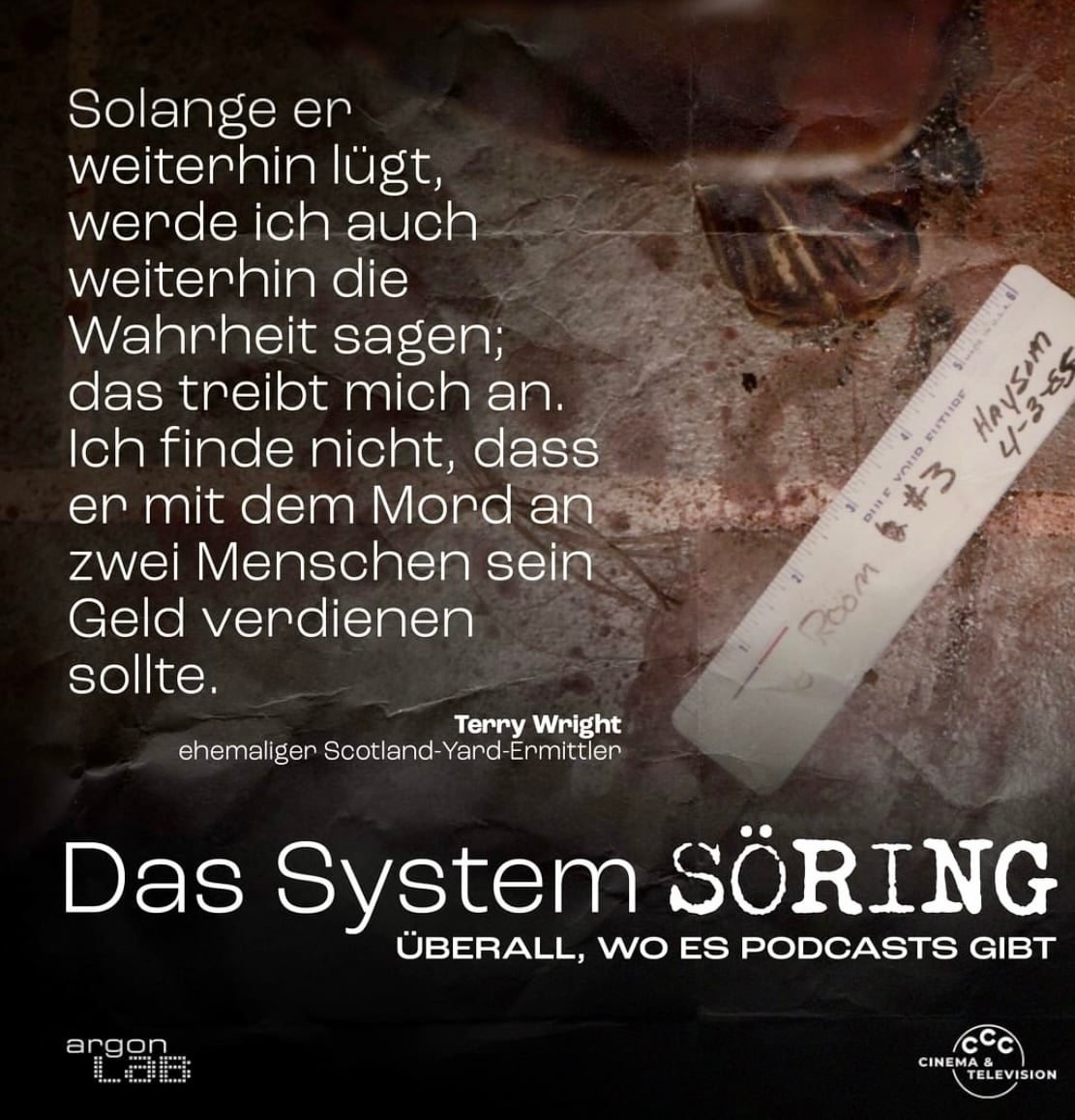 “As long as he continues lying, I’ll continue telling the truth, that’s what motivates me. I don’t think he should earn his money from murdering two people.” — Terry Wright, former Scotland Yard detective.

— “The Söring System”, coming on 22 February 2022 anywhere there are podcasts.

And now to an interesting find from the always-worthwhile Allmystery forum. Below is the German original and my English translation of a 2011 post (g) on the “Black Hamburg” forum, which appears to be a forum for metal fans from Hamburg. A user whom I’ll call Jenny reflects on his or her (probably her) experiences with Jens Söring and his supporters. She had written him many letters and considered him a friend, but she read a blog post from him about his case which didn’t make sense to her. So she asked some critical questions.

You can read below what happened next. I will first post my (informal) English translation, then I will copy in the German original. Team Söring is always on the lookout for criticism of Söring on the Internet and might still try to have the original post removed. So I will preserve it here.

This is an anonymous forum post, so it’s hard to evaluate the writer’s credibility. However, I have met people who have reported similar experiences with Jens Söring and his supporters, so I have no problem believing this story is generally accurate. As for why Jenny prefers to stay anonymous — well, you’ll see.

The story highlights some interesting dynamics about the case in Germany:

Numbers 2 and 3 are group dynamics you might associate with some sort of sect or cult. Which will also be a theme of the upcoming Söring podcast.

Here is my translation, followed by the German original:

“OK – now I actually have to admit an obviously unbelievable mistake.

I must have been very wrong about my assessment of the case and also of Jens Söring as a person. At least that’s what it looks like to me at the moment.

I could also just keep this to myself and draw my own conclusions. But since I wrote here [on the “Black Hamburg” forum] very intensively, persistently and overall just very convinced about the case and the Söring, I think it is appropriate to admit that I was probably too gullible, naive, trusting…. -> Stupid?!? – In any case, I obviously let myself be manipulated. (And that, while I thought hardly anyone could be much more suspicious, skeptical or cautious than me…)

After Jens had written a blog entry (B36 on his homepage) about his case (double murders & his relationship to Elizabeth Haysom …), this (the facts, i.e. his sentences) led to (new old) doubts, questions and uncertainties for me.

Thereupon I – as is my way …  ;D – commented on the blog entry, asking my questions, expressing my doubts, openly addressing what seemed inconsistent to me, what I did not understand, could not explain to myself (alone/self).

In addition, I also expressed these questions/doubts in Jens’ FB profile under the heading “Discussions” (and “Questions to Jens”) – because I assumed there would be perhaps people (e.g. the page admins, thus his “inner circle of friends”), who could/would answer to these questions (in addition to or instead of Jens) and/or perhaps also other people who would respond and with their view of the things, perhaps resolving my conclusions/thoughts about my doubts and inconsistencies.

On Jens’ website you are also invited to “join the discussion” on FB.  – I naively understood it the same way – not suspecting that any criticism, critical questions or anything that is not 100% pro-Jens will immediately be attacked, questioned.

So, long story short: I have recently deleted my FB profile itself (for various reasons, but especially because I had deleted my profiles in other social networks a long time ago, because I had no more desire for “such a thing” from the beginning just with FB me actually did not want to register anyway … … … – answering why why why, leads here too far off and is also my private stuff – actually 😉 ).

Anyway, I now realized that all my blog comments on Jens’ website have been deleted as well – and not by me and not only after prior approval by me.

In addition, I received a rather [rhetorically] violent letter from Jens, in which he told me he would send all my letters (which I wrote/sent to him) to his “circle of friends” and to his (German) lawyers and “threatened” me that I would now be “monitored” by his circle of friends on the Internet, if I wrote anything about him or about his case again, Jens would draw “consequences”.

I would like to note that in none of my FB posts in Jens’ profile and in none of my blog comments on his website had I written anything defaming Jens or accusing him of any “deed” – but I really only asked “critical” questions and expressed (my!) doubts. – I understand this to be a free expression of opinion. ??

As for Jens’ action regarding my letters, I wonder if that doesn’t violate my personal rights (especially as far as privacy/intimacy is concerned)…? – Finally, there are also simply confidential things about me to read in the letters (as one writes that in private letters or messages so), which now other people / complete strangers to me will receive without my consent, my permission, my consent and will read or and perhaps even take more actions I am unaware of!

I have nothing to fear from Jens’ lawyers, I mean – I wouldn’t know what “offense” I’m supposed to be guilty of – but what I’m actually trying to say:

All of this is, of course, was an extreme reaction. You have the intention to “help” someone, someone whose “fate”, life situation, suffering affects you, according to your own possibilities, you engage yourself for him, offers your support, invest time, compassion, thought … after all. – and as soon as you no longer function properly as a puppet, as soon as doubts come to you and you allow yourself to express criticism, to question things – as soon as you become uncomfortable and are classified as not (or no longer) useful, you are attacked or downright defamed, “eliminated” in a rather base manner.

Yes, I was definitely too gullible, too naive. I really believed the whole thing, bought it – especially since everywhere and over and over again you read and heard that he was a man of integrity, authentic, likeable … He said that there were psychiatric reports that certified that he was (allegedly) credible and not a “psychopath”, etc.

Now I’m not saying he’s guilty of the double murder either – how could I know? – I only realize that I was mistaken about the person or that I obviously misjudged the character completely, that I let myself be manipulated, that I “misjudged” – hugely.  Because it just seems very strange to me that:

– Jens did not answer the questions and doubts I raised, the inconsistencies I addressed, and no one else did either (i.e. no one from his “inner” circle of friends – people who are or should be fully informed about pretty much everything). In other words:

If Jens has/had/has nothing to hide, conceal, cover up – why can’t he just not answer the questions (about his “case”, about the course of events, about his own blog entry – his descriptions of the murder weapon e.g. etc.)? ?

– Jens now attacks me in this manner and tries in the most [rhetorically] violent, infamous, shabby way to get rid of or: to silence me. Why is that?

– All my blog comments were suddenly deleted -> after they had been previously moderated and only published afterwards (this is how it is done with all blog comments there) and were still there for quite a while; moreover they were then also commented on by other people. Why were they deleted?

All this looks now even for me no longer like trustworthiness …   I really hadn’t reckoned with something like this.

For some, this may seem too “exhibitionistic” or navel-gazing. – Yes, maybe I should have hidden, buried this in my private thoughts. – On the other hand, there are always two sides to every coin. And if you have drawn a “blank”, so to speak, “counterfeit money”, “a pack of lies” you also have to stand by that mistake somehow. ?

All this time I obviously saw only the shiny, polished side and did not expect in the least or assume that there could also be a dirty, ugly side (concerning this “case”). – As so often: one is then taught a “lesson” (?!?) … and: the only thing to expect is the unexpected. – No, I can’t resist these platitudes either – it just fits.   :-\

Which brings us, or rather me, almost seamlessly back to misanthropy … the temptation is just too great — ok, the experience is also still relatively fresh …

Of course, you don’t know a person with whom you have only corresponded, whom you have never met in person before, about whom you only know what various media report about him and what he says about himself.  – On the other hand – who has not already entrusted someone (and be it via Internet forum 😉 ) in private messages personal, private information – without having known this person really well and long and “personally” before, without being able to call this person (who I took into my confidence) a real friend … ! !?