I have translated articles and commentaries in many academic specialties, including history, economics, criminology, and anthropology.

I have also translated three books from German into English. Here are brief descriptions of them. 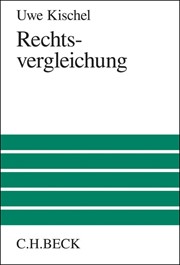 Rechtsvergleichung, or ‘Comparative Law’ in English, was published to wide acclaim in 2015 by one of Germany’s leading legal academic presses, C.H. Beck. Prof. Dr. Uwe Kischel, a renowned expert in international private and public law, set himself the monumental task of creating an approachable one-volume introduction to comparative law which addresses all of the world’s major legal families.

The result of decades of research, Comparative Law achieves the goal, and does so in unusually readable prose teeming with vivid and instructive examples. Kischel’s context-sensitive “hermeneutic” methodology avoids rigid dogmatic classifications or a narrow focus on abstract legal rules. For each of the world’s major legal families, Kischel first provides a general overview of history and structure, then delves into the unique “contextual” factors that distinguish each individual legal system from other, similar ones — and each legal family from other legal families. Drawing on the approach favored by Zweigert and Kötz, Kischel identifies those distinctive aspects of a legal system which attract the attention of experienced legal scholars — which “raise the temperature” of their curiosity.

The result is anything but a dry dissection of black-letter legal principles — Kischel addresses social, cultural, philosophical, and even religious aspects of the law, ever sensitive to the way society shapes law and vice-versa. The result is a lively, readable, deeply informative introduction to the field. In the best tradition of German legal scholarship, Kischel also introduces his own commentary and analysis into the descriptions, inviting dialogue and debate with readers.

Most German commentaries on constitutional law are dense, heavily-footnoted tomes filled with discussions of abstract principles. This book is different: as its title indicates, it is a ‘casebook’, inspired by English and American legal casebooks, which are based on short excerpts of actual court decisions. This book provides concise discussions of hundreds of individual decisions of the German Federal Constitutional Court (of which Prof. Dr. Voßkuhle is currently President), which show constitutional principles in action and interaction with one another.

The result is a lively overview which will be much more accessible to foreign readers than typical German commentaries. The authors’ approach has also proven accessible and popular among German students, as witnessed by the fact that the book is in its seventh edition. The book covers every major aspect of German constitutional law, from the conception and structure of the Grundgesetz (or Basic Law, Germany’s postwar constitution) to the interplay among basic rights and protected legal interests, to the Federal Constitutional Court’s influential jurisprudence on the relationship between national and European Union law.

3. Prof. Dr. Philipp Dann, The Law of Development Cooperation: A Comparative Analysis of the World Bank, the EU and Germany, Cambridge University Press, 2013.

“Development interventions are agreed by states and international organisations which administer public development funds of huge proportions. They have done so with debatable success, but, unlike the good governance of recipients, the rules applying to donors have hitherto received little scrutiny. This analysis of the normative structures and conceptual riddles of development co-operation argues that development co-operation is increasingly structured by legal rules and is therefore no longer merely a matter of politics, economics or ethics. By focusing on the rules of development co-operation, it puts forward a new perspective on the institutional law dealing with the process, instruments and organisation of this co-operation. Placing the law in its theoretical and political context, it provides the first comparative study on the laws of foreign aid as a central field of global public policy and asks how accountability, autonomy and human rights can be preserved while combating poverty.”